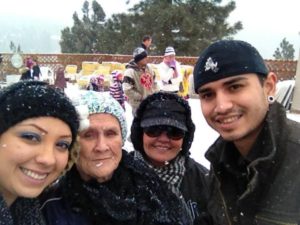 The details of this story as they have been unfolding seem to indicate a high level psyops type infiltration into what remains of the resistance camp at Standing Rock with apparent collusion of tribal leaders as well as paid mercenaries from companies like Blackwater. The goal appears to be to smear the camp and the movement and manifest what the governance, the law enforcement and the media of the state have been saying all along: that the indians and their ‘outsider’ allies are dangerous and violent criminals. It remains unclear how, but the monies paid to the man who made a false report to police of elder abuse, and framed Kathleen Bennett, came from the group Veterans for Standing Rock headed by Wes Clark Jr. and Michael. Wood. Jr. and the invoices approved by an agent for the Veterans for Standing Rock group, Loreal Black Shawl – who has since been rumored removed from camp.

The family headed by the elder, Mary Trujillo – – the 82 year old who was kidnapped and who is a direct descendant of the only survivors of the original Wounded Knee Massacre – – along with her daughter Kathleen Bennett and grandson Russell Vasquez went to fulfill their destiny in the legacy of their ancestors: protect mother earth and sacred water. They were among those who heeded the call to come to Standing Rock in the most deplorable conditions and at a critical time: Winter.

When the Veterans for Standing Rock were scheduled to arrive Dec 4th and the blizzard hit, everything seemed to change. The veterans, despite their many heartwarming and supportive actions were not allowed to take any direct actions they had planned prior to their arrival. The leadership of the vets headed by Wes Clark Jr. and Michael Wood Jr. dissolved and rumors began to spread. As it would later be revealed Mr. Wood Jr. began a company with the money raised for the Vets for Standing Rock, and Mr. Clark was removed from the equation.

In the chaos of the blizzard the order came down from the SRST chairman that the camp would have to be evacuated because of the hazardous weather conditions, elderly, women and children especially. Four thousand plus veterans also had to be evacuated to the Prairie Knights Casino. The goal, according to my interviewees was that the people should go home and not return: The sacred fire had been put out, the prayers had been answered and everyone should go home for Christmas. The next frontline, was in the courtroom, according to SRST chairman Archambault.

The void in leadership at the camp was quickly filled by a group of new arrivals that included dozens of veterans who were committed to stay. No one realized that among them were infiltrators; people who were clearly planted with false identities, fake back stories, and nefarious intentions: to clear the camp by whatever means necessary including COINTELPRO type operations where people are framed by false accusations and paid informants, where names and reputations are smeared in the midst of accusations of theft or other crimes that could discredit the remaining ‘real’ leadership and the end the protest. The types of crimes mentioned to me by both of my interviewees: Melanie Stoneman and Bill Running Fisher included: assault on police with IEDs, rape of minors, needles, marijuana, alcohol, beatings, fraud, theft, arson, and elder abuse.

The connections I was able to make during my interview with other key individuals within the camp indicate that Loreal Black shawl was instrumental in the leadership of the veterans camp after the veterans were forced to leave in the evacuation following the blizzard. Russell Vasquez, Kathleen Bennett’s son, felt called to fill the void of leadership at the camp. And even though he heard that the Black Shawl ‘clean up crew’ intended to ‘burn down’ and dispose of the tents, structures and belongings left behind by the veterans, he decided to gather up the materials left behind and save them to be used to build a sustainable community at Standing Rock. This, after all, was the spirit of what the camp intended. In so doing, he uncovered the intentions of some of those within the security teams as well as the medic teams. Once, for instance, he relayed to me that he boasted openly about going to the frontlines to see if an infiltrator would give away his position to police or DAPL security. Sure enough he noticed an SUV was seen out on the road that night at the location he gave. He knew then, there were infiltrators giving direct information to police.

After broadcasting my full report on social media Jan 9th, I was contacted by a womanclaiming to be with the Veterans for Standing Rock who frantically told me to check my email for some invoices which connected Bill Running Fisher to Loreal Black Shawl. The invoices, dated Dec. 17, 2016 – – the same date that Mr. Running Fischer first reported the incident of elder abuse which he claims took place on December 6th – – was approved for payment by Black Shawl for $125,000.

When I interviewed Mr. Running Fisher, he made mention of Loreal as the person who he claimed was responsible to make the police report on the incident that he was witness to. It seemed preposterous to me that a person working for law enforcement and security firm would not know that only they, as a mandatory reporter, would be able to make their report to police. He also claimed not to have any photographic or video evidence even though it is notoriously known that every person in SR, especially those on the security and medic teams always carry such recording devices.

My in depth interviews with witnesses Josh Long, Jesse Sankey, Russell Vasquez and the information which I have since received from various sources, including Ms. Jones (mentioned above – – and which I have included in the documents and evidence forwarded) make clear that Mr. Running Fisher has falsely reported a crime of elder abuse to implicate and incriminate a family which has direct information of the crimes committed by Morton County against water protectors (Kathleen Bennett was on the frontlines and gave her eyewitness testimony to others of police actions) as well as to silence her son Russell Vasquez who uncovered and reported anonymously on Facebook live that he was aware of thefts of donations for SR and that there were infiltrators in camp and who they were [we have since uncover others in the course of our investigation]. Shortly after he did the live feed, his grandmother was kidnapped and they were forcibly removed from camp on December 17.

The woman who was given emergency guardianship over Mary Trujillo, 82 who suffers from dementia, Melanie Stoneman, was oddly not mentioned in the article printed by the Bismarck Tribune on Jan. 5, and stated in her interview with me on Sat. Jan. 7, 2017 that she was not listed in the article ‘because’ she had yet to give her interview/statement to the Morton County Sheriff’s dept.. She was very apprehensive throughout the interview that talking to me would mess up her guardianship and possibly incriminate her.

Kathleen Bennett was arrested, the the courthouse put on lock-down as if she were a major threat- when she attempted to go into the courthouse to refute the guardianship temporarily given to Ms. Stoneman and provide additional evidence of her lack of qualifications to be an adequate caretaker/guardian. By a twist of fate, during the event, the Bennett family’s attorney recognized Stoneman and advised his clients grandson, Russell Vasquez, that the woman Melanie Stoneman, had been the defendant in a case where Melanie  – – then apparently a meth addict – – had kidnapped her children and had served time for her crime. A felon had custody of his grandmother. The judge set another hearing date and stated that everything presented by Melanie Stoneman, was hearsay and that she would have to provide solid evidence or custody would revert back to Kathleen Bennett.

Black Shawl, and other who we have connected with her group have emerged as instigators who we have evidence are falsely representing themselves, bringing in contraband and committing crimes, and then framing or implicating SRST camp goers. These people seem programed to initiate events in the camp to create (and some have invited) a raid by Morton County of the camp. And their narrative seems in unison to those of Melanie Stoneman, and Mr. Running Fischer. If you listen to their interviews, and my show in which we dissect the story, the interviews, and the evidence we collected as well as the analysis and counterpoints from the witnesses in this case – you will find that this story is one of fraud, deceit, and treachery; which is still unfolding as we speak. Ms. Stoneman advised me in her interview that “they” were making a big announcement soon which I surmise will include their false narrative. Hopefully, this story and the information contained in it will reach the people before these actors can malign the people of Standing Rock, and kill the movement to stop the Dakota Access Pipeline.

In the end, it seems Loreal Black Shawl, who according to Sandi Jones is the person who was hired by the Veterans for Standing Rock to “clean up after the Veterans were evacuated on Dec. 6”, and was being paid $5,000 per week to do so, never did that work.  She never told anyone that was her job, and kept the money while Russell Vasquez headed up a team to do the clean up that Loreal and her team planned to destroy. He and others at the camp planned to remain, protect, and carefully steward the resources and people around them in solidarity with the Stand for Standing Rock. Loreal Black Shawl was there apparently to front as a veteran protector when in fact she was signing off on payments to Bill Running Fisher of 125 thousand dollars for equipment related to Loreal’s ‘security team’, which was – – according to those who ousted her from camp – – inflated and amounted to a ‘scam’. Again, the invoice coincides directly with the date on which Mr. Running Fisher gave his 11 days tardy statement of elder abuse to Morton County and was approved by Ms. Loreal Black Shawl. It seems clear that the public needs to know of this story so they can free Kathleen Bennett, reunite her with her elderly and infirm mother who in a fragile state and could be at high risk in the care of this imposter, Melanie Stoneman, and to clear name of the Standing Rock people, the movement for clean water and the fight against the “Black Snake”. The fact that Loreal Black Shawl, an agent of the Veterans For Standing Rock and official signee on the monies paid to Bill Running FIsher should also be known and investigated by Wes Clark Jr.,  Michael Wood Jr. and authorities. The reality that Ms. Stoneman, Ms. Blackshaw, and Mr. Running Fisher are with their loved ones, (Ms. Black Shawl is currently in Las Vegas visiting her sister – – who coincidentally bought a new home) while Mary lays in a hospital wondering if her family has abandoned her, is heartbreaking, especially considering the division and heartache these people have caused to Mary Trujillo, Kathleen Bennett, and Russell Vasquez.

Our lives have been personally threatened and we have good reason to believe that our communications are also being constantly monitored and interrupted. It’s imperative that this communication reach a broad audience – – and quickly. The lives of our crew at KPPP-LP radio and those of our witnesses, as well as our fates, may depend upon it.

UPDATES
After a year of work on this case “Morton County Dismisses charges against Kathleen Bennett Case”.

The complete story can be found here:
http://kpppfm.com/podcasts/a-mexican-crossing-lines-compiled-story-links-related-to-kathleen-bennett/