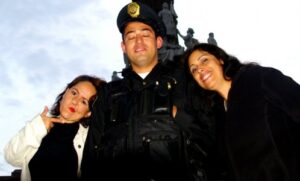 Condemning abuse of power is a patriots job.

(Previously published in the HPR in 2011, links have been updated.)

While recently being horrified at the numerous news reports of Occupy protesters and Black Friday shoppers brutalized by police, I was reminded by a friend that cops are not monsters. Unfortunately, it is not uncommon for people to react with anger. Condemnation of authorities or government – – even when those entities are being outrageous—goes against our better judgment as ‘good Americans’. My zeal in fact finding and repeating news was coming across as hatred of police—which is totally untrue.

I do, however, hate injustice. Currently (and historically) police and government authorities have been at the heart of many of those injustices.

For the record— I agree that police are not monsters. They are humans just like you and I. Because they are humans, they should be subject to the same rules, justice and higher scrutiny – – not less—than the rest of us. They carry guns, after all. They can shoot and kill you. Even Spiderman tells us that with great power comes great responsibility! But the reality is that law enforcement officials are held to a very different; one where outcomes of an unequal system of accountability results in press conferences where the police spokespersons usually sound like this: “The police felt threatened. Therefore, regardless of guilt or innocence of the victims, police were totally justified in their actions.”

Something is very wrong with the unjust treatment people receive at the hands of officers. In fact, since 9/11, increases of police brutality have been alarming and well documented. Even a cursory review of Wikipedia shows an alarming rise in police abuses:

“An extensive report prepared for the United Nations Human Rights Committee tabled in 2006 states that in the United States, the ‘War on Terror’ has “created a generalized climate of impunity for law enforcement officers, and contributed to the erosion of what few accountability mechanisms exist for civilian control over law enforcement agencies. As a result, police brutality and abuse persist unabated and undeterred across the country.”

The issues of police brutality in a society such as ours are compounded by the tightly knit law enforcement community and their lack of transparency. Although there have been steady increases in civil rights violations by officers, federal records show the “vast majority” of police brutality cases are not prosecuted. This has been the case going back to the Carter administration.

According to a USA Today story on the “code of silence”, “Such cases, in which officers are accused of using excessive force, are usually plagued by problems with victims’ credibility, a lack of strong physical evidence and the police “code of silence.” But, why is that?

Society tends to believe the “good guys” (being the cops) and find fault with the “bad guys”, usually the victims or alleged victims of police brutality and civil rights abuses. A former Dept. of Justice prosecutor with over 30 years of experience said police misconduct cases are “by far the hardest cases” of any criminal cases to prosecute. His lengthy experience as Deputy Chief in the Civil Rights Division taught him three things:

(1) People are predisposed to believe cops, and regardless of the evidence, will refuse to punish them.
(2) Law enforcement protect their own. Most officers will refuse to testify against another officer.
(3) Judges are frequently as biased as juries. They hate to prosecute law enforcement or convict them and will go out of their way to ensure they are acquitted.

Take Jude Frank, for instance, he was beaten by racist off-duty Milwaukee police officers who kicked him in the head repeatedly and stabbing him in both ears. After a jury acquitted the police, Milwaukee erupted in angry protest. A year later prosecutors tried again filing different charges. However, it was incredibly difficult to gain testimony from other officers—which were the eventual key to the 7 police convictions finally obtained. To hear other accounts of police misconduct, listen to this episode of “This American Life”: Cops See It Differently, Part One

How can we not be horrified seeing violence against a tiny 84 year old woman, priests, military veterans, pregnant women (who was kicked and maced resulting in a miscarriage), and the unprovoked macing of U.C. Davis students peacefully protesting? So far the response in all the recent cases of brutality and abuse have been the standard ‘the officers actions were justified’. Upon seeing such injustice one can only conclude our system is obviously broken.

Most complaints against police are handled by other police in the ‘internal affairs’ department. Usually, the process is very secretive, results in no action against the law enforcement authority, and people have no recourse to appeal findings of “not guilty”. The inability of police to ‘police themselves’ has always existed, but until recently has not been criticized on any grand scale.

Another reason some people may have the knee jerk reaction to defend police when they are accused of brutality is that most police brutality goes unreported, is hidden, or is accepted practice.

After Rodney King, since 9/11, and with the advent of visible brutality by police in Occupy movements, America has begun to acknowledge that the reality of police brutalities may be more widespread. Another reality coming to light is that of the deep inequalities and unjust criminalizing of people of color in America’s justice systems. The perception that causes most people to believe over victims works in tandem with the parallel perception that most victims belong to an underclass which is largely poor, powerless, and non-white.

Between 1980 and 2000, although crime statistics steadily declined, the prison population quintupled! During that time, many states have privatized the prison systems. Also, during that time, America has escalated it’s “war on drugs” and the war against “illegal immigrants” creating fresh new crops of ‘criminals’ to fill cells in American prisons.

Imprisoning people is big money right now! This article on the economy of prisons is eye opening: Prison Policy Initiative. Corrections Corporation of America and GEO group, the two largest private prison companies, raked in 2.9 billion in 2010. Interestingly, although there was only a 16 percent increase in total prison populations the number of people inexplicably hiked in private federal prisons by 120 percent, and in private state prisons by 33 percent. The hunt and detention of “illegals” is a multi-billion dollar industry unto itself. This disturbing video shows how: Immigrants for Sale

Human rights groups say these corporations are dependent on racist immigration policies and laws that allow the detention of people of color for profit. This truth was galvanized when the Southern Poverty Law Center, and others exposed that Arizona’s immigration bill and copy-cats are coming directly from the work and groups formed by Nazi sympathizer and eugenics leader John Tanton. You can read the intelligence files on John Tanton here: Tanton SPLC Files

Illegal, criminal, or not; those held and detained as suspected “illegals” can bring a pretty penny for each day spent in prison: $200 per day, $6000 per month, or $72,000 per year. The average American citizen’s wage isn’t even that high, much less that of people of color or undocumented immigrants. The privatization of prisons have made the lives of these people more valuable when, and only IF, they are in prison. Just ask Anthony A. Clarke, an American citizen from Minneapolis. He was detained for deportation for 45 days despite the FBI being fully aware that he was a citizen.

Michelle Alexander, a litigator, human rights advocate and Soros Justice Fellow with a joint appointment at the Kirwan Institute for the Study of Race and Ethnicity explains in her new book The New Jim Crow: Mass Incarceration in the age of Colorblindness, how selective policies targeting people of color (like the war on drugs) have lead to 50 percent of all black men living under correctional control. That’s more black people than were oppressed during slavery or the Jim Crow era!

Mass incarceration in America is having other consequences. There is a greater demand for law enforcement authorities. Once they required lengthy training and received good pay and benefits. Now they are being undercut by hastily trained, poorly paid start-ups. And the turn over in the private prison industry is high!

James Pasco, Executive Director of the Fraternal Order of Police, the nation’s largest police union, shared concerns as early as 2007 that law enforcement agencies may have been dropping standards and cutting back on training to fill vacancies. Today, those realities are manifesting in the services we receive from the authorities charged with protecting us. Pasco’s fears are becoming reality.

Sadly, despite our desire to support law enforcement and their hard work, we cannot blindly accept that those who are brutalized by police ‘had it coming’. So far, that attitude has only led to more widespread abuses. Demands for accountability of authorities should be made to ensure the abuses of power don’t go unchecked. Pretending nothing is wrong is not the answer. The reality is this: the issue is much more complex than the ‘good guys’ vs. ‘bad guys’ argument most Americans want to believe. Accepting the reality may be brutal, but —and I can guarantee this unequivocally- – way less brutal than being maced in the face! Cindy Azucena Gomez-Schempp is the Co-founder of The People’s Press Project, a media justice non-profit. She is also the host of A Mexican Crossing Lines. She’s an author, writer, and implements new media/social media outreach and web optimization, translating and cultural consulting services. Questions and comments: cindy@fmppp.org

Click here for a link to make a Tax Deductible Donation